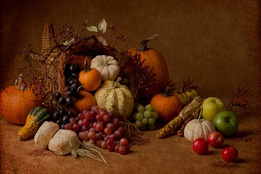 4 thoughts on “Social Studies Mini-Spark #24: Thanksgiving – The Origin of an American Holiday”