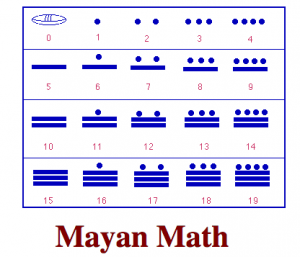 The Mayans were a classical civilization of Mesoamerica.  Originating in the Yucatan around 2600 B.C.E., they rose to prominence around A.D.E. 250 in present-day southern Mexico, Guatemala, western Honduras, El Salvador, and northern Belize.

Mayan Math was the most sophisticated number system ever developed in the Americas.  Astronomers and architects used Mayan Math, but it was also simple enough to be used by uneducated traders and farmers.  Where we use ten different symbols to represent numbers (1, 2, 3, 4 , 5, 6, 7, 8, 9, 0), the Mayans used only three: a dot for a one, a bar for five, and a symbol (usually a shell) for zero. (The Maya were the first civilization to discover and understand the concept of zero.)  The chart above shows the Mayan numbers 1 – 19.

Pretty smart, right? Especially, when you consider that the Ancient Egyptians never cracked the concept of zero and that complex calculations with Roman numerals were way too complicated for ordinary Romans.

Your challenge for this week’s math minute is to use Mayan Math symbols to create 5 math problems using Explain Everything, Notability, or your Drawing Pad app – you choose!

Once you’re done creating your math problems, send them to your EY Coordinator!