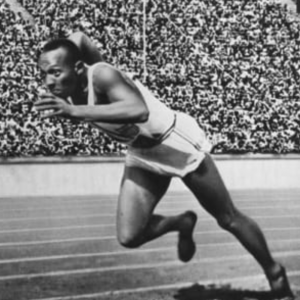 February is Black History Month, and it’s also the month for the 2022 Winter Olympics. To combine the two, we’re going to learn today about a great African-American Olympian, Jesse Owens.

Who was Jesse Owens?

Track-and-field athlete Jesse Owens won four gold medals at the 1936 Olympic Games. His achievements were important for himself and for many other people at the time. The Games were held in Berlin, Germany. Nazi leader Adolf Hitler was in power there. Nazi banners draped the sports field. The Nazis believed white athletes were best. But Owens proved that they were wrong.

James Cleveland Owens was born in Oakville, Alabama, on September 12, 1913. His family later moved to Cleveland, Ohio, in search of better opportunities.

Jesse became a track star at a young age. In 1928 he set track records in the high jump and the running broad jump (long jump). In 1933, while he was in high school, he broke three other records. He then went to Ohio State University.

In the Olympics Owens won gold medals for the running broad jump, the 100- and 200-meter races, and the 4 × 100-meter team relay. He also set new Olympic and world records.

Owens graduated from college in 1937 and worked for the Illinois Athletic Commission. He later got involved in guidance activities for young boys. He also made goodwill visits to countries in Asia for the U.S. government. Owens died in Phoenix, Arizona, on March 31, 1980.

To learn more about Jesse Owens, watch the video below.

What is the most important thing you learned about Jesse Owens? Comment below.