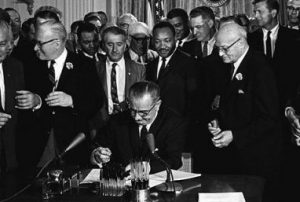 Many of you know that Dr. Martin Luther King, Jr. was a crusader for Civil Rights. He had a dream. In some ways, that dream became a reality through the passage of the Civil Rights Act of 1964.

The Declaration of Independence declared that “All men are created equal.” However, when the country was first formed this quote didn’t apply to everyone, only to wealthy white landowners. Over time, things did improve. The slaves were set free after the Civil War and both women and non-white people were given the right to vote with the 15th and the 19th amendments.

Despite these changes, however, there were still people who were being denied their basic civil rights. Jim Crow laws in the south allowed for racial segregation, and discrimination based on gender, race, and religion was legal. Throughout the 1950s and early 1960s leaders like Dr. Martin Luther King, Jr. fought for the civil rights of all people. Events such as the March on Washington, the Montgomery Bus Boycott, and the Birmingham Campaign brought these issues to the forefront of American politics. A new law was needed to protect the civil rights of all people.

On June 11, 1963 President John F. Kennedy gave a speech calling for a civil rights law that would give “all Americans the right to be served in facilities that are open to the public” and would offer “greater protection for the right to vote.” President Kennedy began to work with Congress to create a new civil rights bill. However, Kennedy was assassinated on November 22, 1963 and President Lyndon Johnson took over.

Main Points of the Law

The law was divided up into 11 sections called titles.

A year after the Civil Rights Act was signed into law, another law called the Voting Rights Act of 1965 was passed. This law was meant to insure that the right to vote was not denied any person “on account of race or color.”

Take a quiz to test what you learned about the Civil Rights Act of 1964.